It's Time To Mouse Around 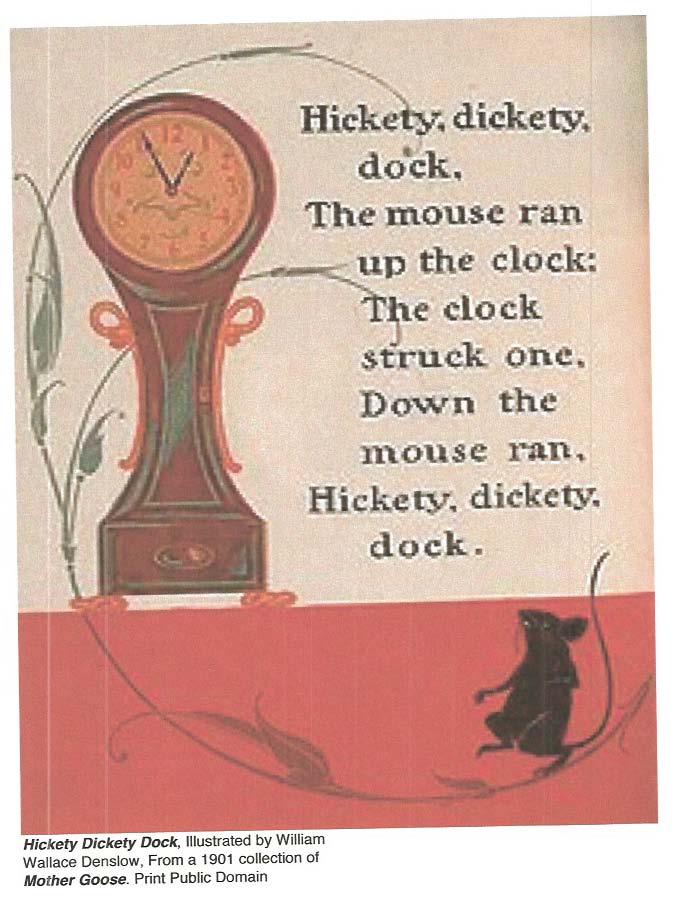 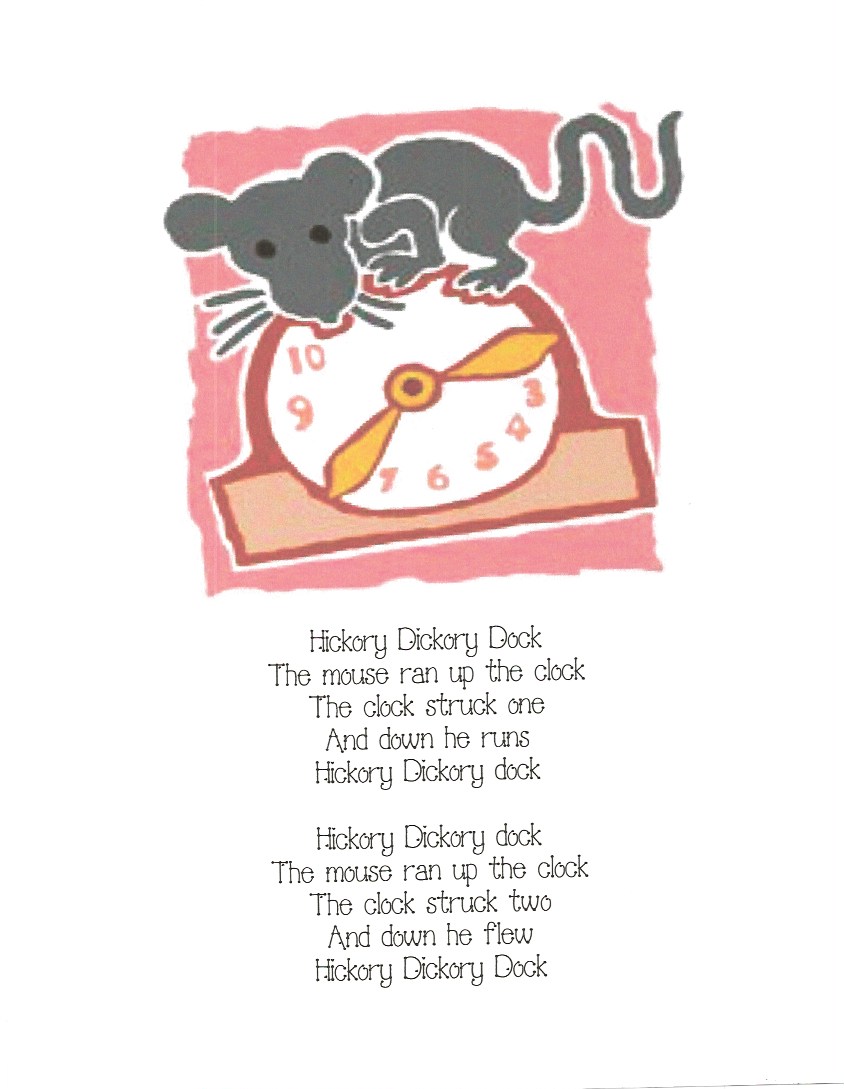 As I’ve stated in other articles, I try to plug in a nursery rhyme whenever it seems to fit in with whatever else I’m doing, so at the start of learning about telling time, it just seems appropriate to read Hickory Dickory Dock to children.

When looking into the background of this nursery rhyme, I discovered that it was indeed intended to teach about counting.

Who knows, maybe that led to the possibility of a little bit of time telling thrown in, as the reason why numbers were so important.

Hickory, dickory, and doc, is believed by some to mean,  8,9,10.  How we got to one and why a mouse is running around the clock, remains a mystery, but makes a wonderful writing prompt.

In my packet, Hickory Dickory Clock, I’ve included 2 such writing prompts that turn into what could be hilarious class books: Hickory Dickory Dock: Who Else Went Up The Clock and Why? Helps students use their imaginations and work on verb skills.

I’ve written an extension of the poem to help jumpstart their imaginations, as well as review all 12 numbers, where a duck waddles up the clock at 3, followed by a rabbit who hops up at ten only to do it over again, culminating with my favorite, the cow, who of course jumps over the clock at noon, hoping to later jump over the moon.

A trace and write the verbs worksheet is also included.

The other class book is entitled: Why Did The Mouse Run Up the Clock? Did he have a secret meeting with his girlfriend; was there a piece of cheese hidden up there; was he running away from the cat?  Your students will have fun solving the mystery on their page and illustrating it.

There’s an anchor chart poster of the modern version of the rhyme, as well as one of the 1901 Mother Goose version that uses the intro line “Hickety Dickety…” 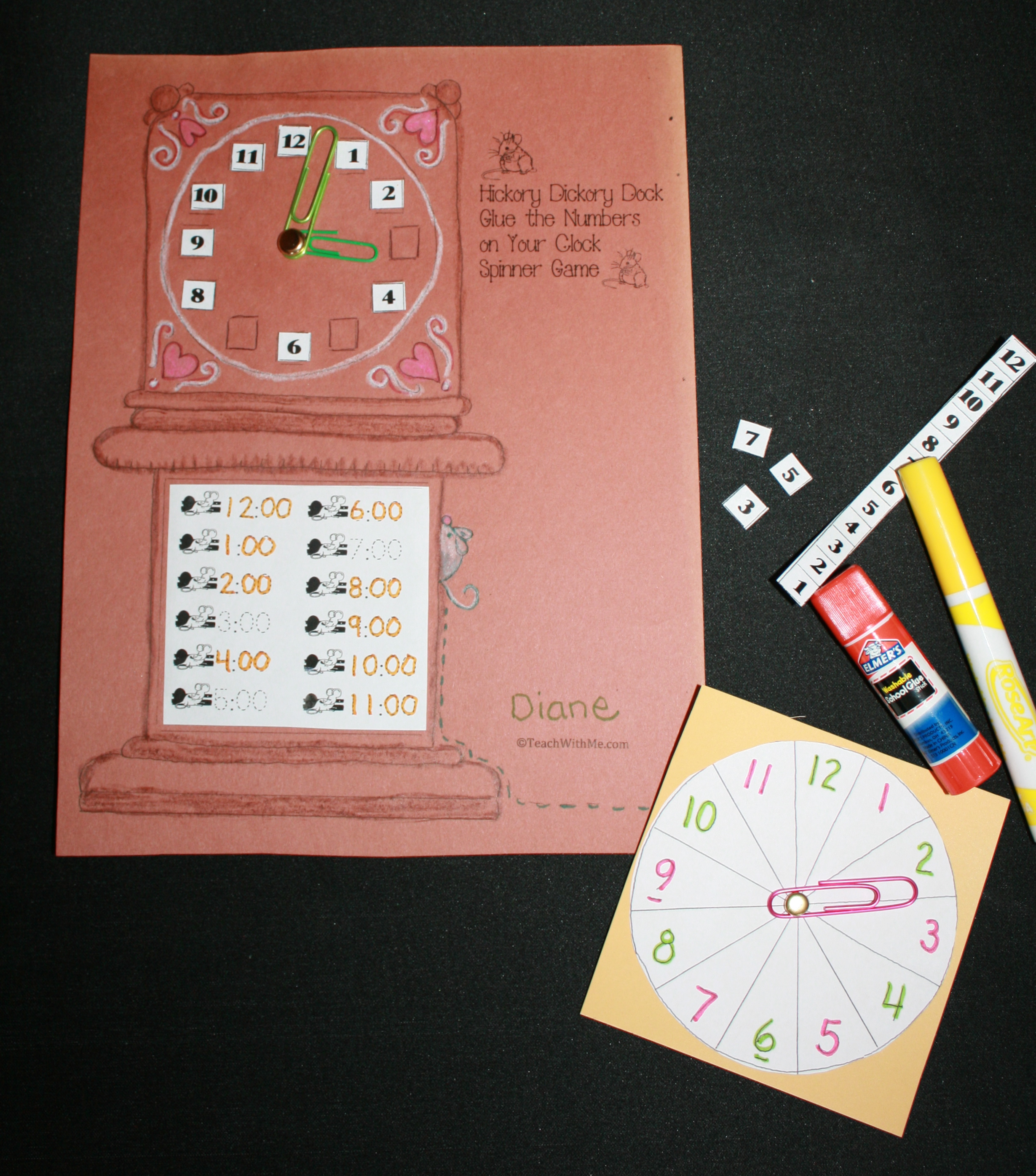 Also included are two “craftivities” and a spinner game, which help reinforce telling analog time as well as digital time.

Hickory Dickory Dock Glue the Numbers on Your Clock, is a spinner game that is played with 2 to 4 players.

Students twirl the spinner. Whatever number they land on, they snip & glue to their clock and trace the digital time on the pendulum area.

The first child to complete all 12 numbers is the winner and receives a mouse for the top of his clock as well as a mini-certificate.

The rest of the children glue their numbers on their clock to earn their mouse sticker as well.

Teachers can have students add a brad and paperclips for clock hands to make this game into a “working” clock to whole-group assess the students, if they want to take this one step farther, or stop there and make the paper plate mouse clock. 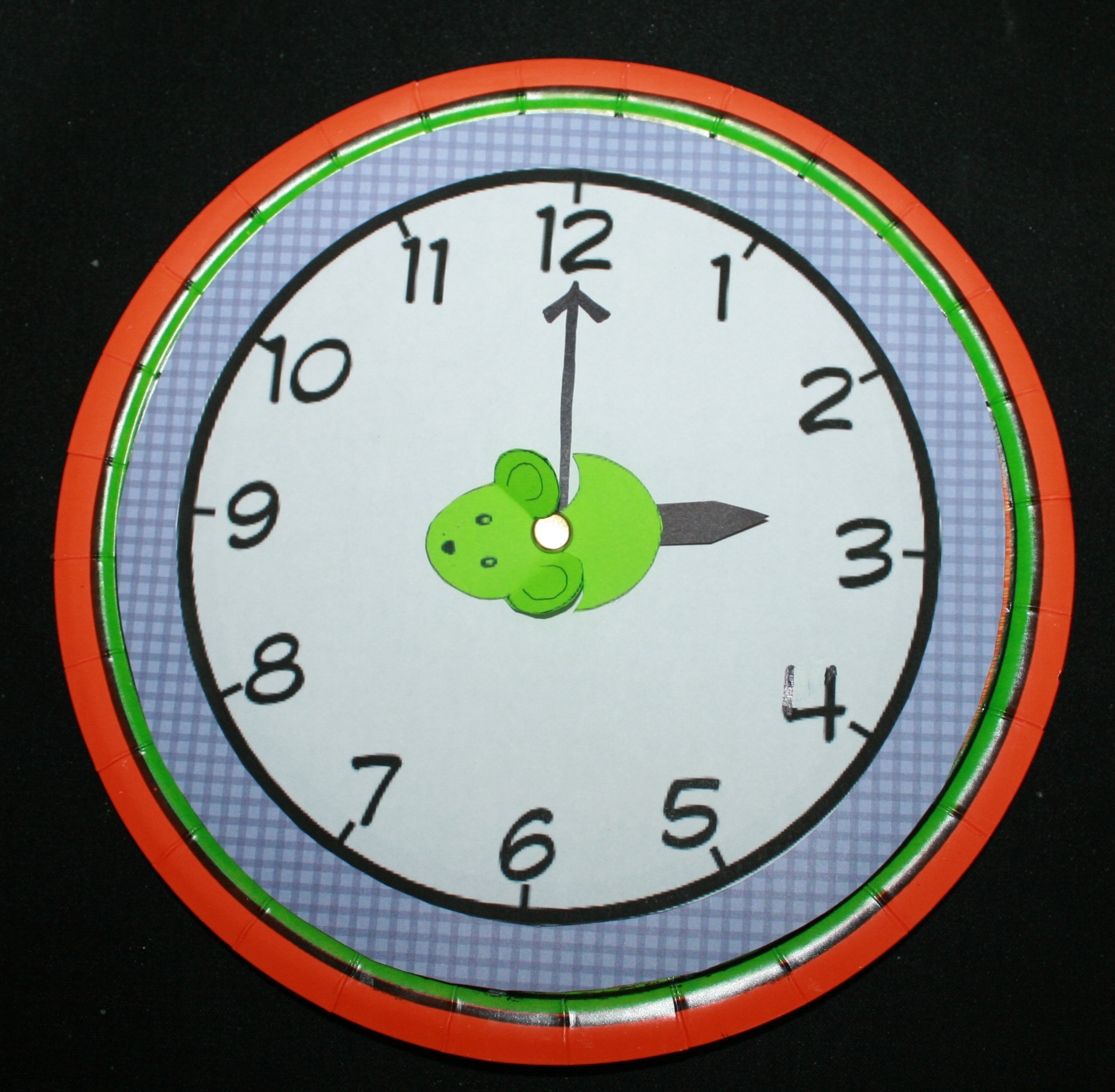 Here students cut out their clock face and glue it to a colored paper plate.  I used multi-colored Halloween plates that I got on sale and then ran off the mice on neon green construction paper for a nice pizzazzy complimentary color.

Pre-cut small strips of black paper. Students will snip these into a point and glue one to the back of their mouse.  If you want the ears to be 3-D have them cut on the lines and bend back.  This will help them move the mouse to the different times, as they can gently tug on an ear.

Poke a hole through the mouse, add a brad and fasten it to the back of the plate.

Whole group assess to the hour, by calling on students to give you a time.  Children move the mouse’s tail to show that time and then hold up their clock.

Cat Got Your Tail? Time to the hour mouse slider:

Finally, “Time to Pull the Mouse’s Tail” also reviews time by the hour.

Students glue their two "clock tail” strips together and make hands to show the time from 1 to 12. 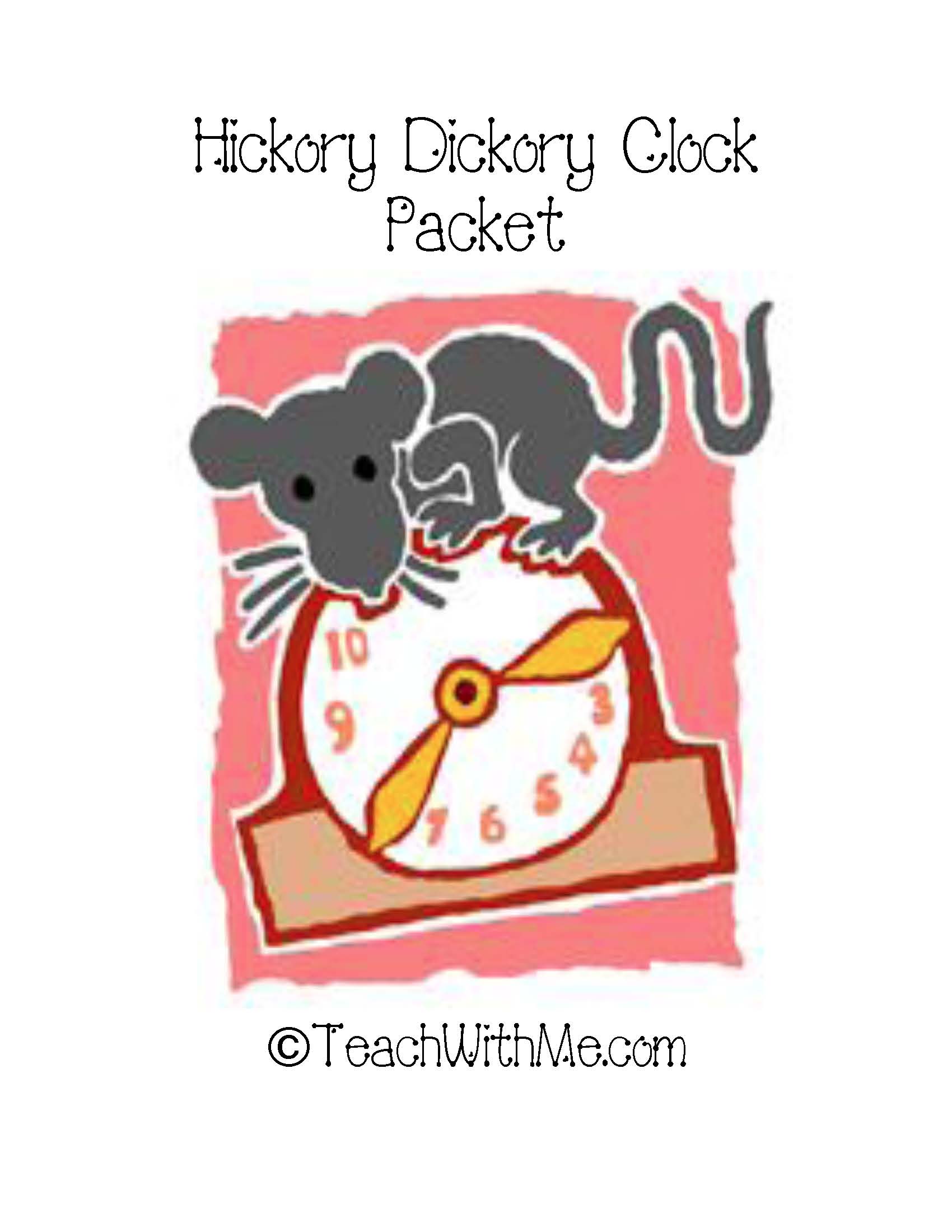 Teachers cut slits with an Exacto knife in their mouse and slip their “clock tail” into the mouse.

The teacher calls on quiet students to call out a time.  Children slide the mouse’s “tail” to reveal that time and hold up their mouse.

Play continues ‘til all 12 times have been shown.

A sample of each one of the activities makes a sweet bulletin board: "Time to see what's up in ____________'s classroom!" or... Hickory Dickory Dock What's Going On On Our Side Of The Block?

I hope this idea comes just in TIME to be a nice fill-in for whatever you’re doing right now.

I’d enjoy hearing about how you use it. diane@teachwithme.com

Feel free to PIN away if you find anything on my site worth sharing!

"Don't put a question mark, where a period should be." -Unknown

More in this category: « Bunny Activities The Very Hungry Caterpillar Activities »
Login to post comments
back to top