1-2-3 Come Make Some Bunny Shapes With Me

As with many of my other activities, the Shapely Bunny packet took many more hours than I thought it would.  It's two days later, and I'm finally done! Woo hoo.

Since the other Shapely Animal packets have been such popular downloads, I decided to add another one for spring.  If you missed the Shapely Slick Chick packet I published earlier this month, click on the link to grab it.

The Honey Bunny packet follows a similar format. I've included large shapes that students can add details and ears to, to make their shapely bunny, as well as a set with bunny features drawn in.  Make a set, laminate and then use as a sweet spring bulletin board.

Have children pick out their favorite shape and make one of their own.

If you want to turn their work into a bulletin board as well, toss the shape cards into a container and have them choose one.  Whatever shape they pick is the Shapely Bunny that they'll create.

I've included a big bunny poster that you can personalize with your name and the caption: "Mr(s) ____________'s class is really shaping up... or "Somebunny" knows their shapes.  Hang this in the center of your bulletin board.

Use the other poster to make a "What's the secret shape?" game.  Draw a question mark on an index card and tape it to the laminated poster so that it's a "hinged" "flap" door.

Using a dry erase marker, draw a shape underneath.  Call on children to guess what shape is hiding?

Children trace and write the shape words, as well as trace and draw the shapes and then draw details on the first shape to make it look like a bunny.

The last page asks them which Honey Bunny was their favorite.  A graph is provided to record this data.

These are perfect for Memory Match or "I Have; Who Has?" games.

Add the bunny Kaboom cards to your game to make things even more fun.

There's also a set in black and white, which includes a cover, so that students can make an Itty Bitty Shape Booklet.

Whatever shape they land on, they color the matching shape on their funny bunny.  The child who completes their worksheet first is the winner.

Finally, I've also included a worksheet with spatial directions, one for listing a shape's attributes, plus a match the shape to the shape word.

When everyone has completed whatever projects you want them to do, pass out the certificate of praise.

Click on the link to view/download the Shapely Bunnies Packet.  Thanks for visiting today.  Feel free to PIN away.

"I've never been a social bunny.  I thrive on work." -Michelle Ryan

Spring Is Shaping Up

1-2-3 Come Do Some Shapely Activities With Me

Since the Silly Shaped Penguins, as well as the Shapely Owls have been such popular downloads, I decided to design a spring "craftivity" too.  When I took a look at all of the spring baby animals, the cute little chick clicked for me!

Like the Penguin and Owl Shape packets, I designed all sorts of shape-themed activities around these cuties.

I hope you enjoy using them, as much as I had fun making them.

I've included patterns for the standard 2D shapes, as well as the pattern block trapezoid and rhombus shapes, plus the 3D cone, cube and cylinder shapes.

For more pizzazz, tape a real feather to the top of the chick's head and accordion fold the legs.  Adding wiggle eyes also adds more pop.

You could also make the wings moveable by punching a hole and attaching them with brass brads. Click on the link to view/download the Shapely Slick Chick Packet.

The packet includes a set of black & white shapely slick chick cards, as well as a full-color set.

These are perfect for Memory Match or "I Have; Who Has?" games.

Run off the black and white templates and have students make an Itty Bitty Slick Chick Shape booklet.

They trace and write the shape words, add features on the first shape to make it look like a chick; trace the second shape and then draw the shape.

On the last page they tell which shapely slick chick they liked the best.

I've included a graph, so you can record the results.  Standards are also covered with worksheets for spatial directions, attributes, and matching the word to the shape.

Finally, to build self-esteem, I designed a sweet certificate of praise.  Click on the link to view/download the Shapely Slick Chick packet.

"The first day of spring is one thing, the first spring day is quite another. The difference between them is sometimes as great as a month." -Henry Van Dyke

1-2-3 Come Do Some Thanksgiving Shape Activities With Me

One of the most common symbols of Thanksgiving is the Pilgrim hat. When I was doing research about the Pilgrims for several of the packets, I was surprised to learn that they did not really sport the large brass buckles on their hats and shoes, despite belief to the contrary.

In search of a "buckled up" pilgrim picture, I came across a costume company that sells this "authentic" Pilgrim garb.  It is because most of the 17th-century artists also depicted couples this way, that we have come to believe that they all wore buckles.

Buckles didn’t come into fashion until decades after the Pilgrims left England, and were used as a status symbol, since they were more expensive than other fastening solutions.

The Pilgrims did wear the conical hats, which I discovered were called capotains, but they didn’t have buckles, nor did their belts.

Pilgrim boys and men, held up their pants with leather laces tied to their shirts and doublets. These facts have been gleaned from historical records, passenger lists, wills, diaries, and letters that included descriptions of clothing.  Buckles later became very popular in England because they were an expensive fashion statement, however, they were not part of Pilgrim dress.

I thought you'd enjoy learning this bit of trivia, which you can share with your students when they do the Shapely Buckle craftivity.  Years ago I made a Pilgrim buckle shape booklet, and thought I'd up-date that idea with a new packet.

This one includes a pattern for the Pilgrim's hat, which I cut out of black construction paper.  A mini-buckle booklet is stapled together and then glued to the center of the hat.

Children flip the pages to reveal the different shaped buckles.  Adding a bit of gold glitter glue to the cover, really adds that finishing touch.

A graphing extension is also included, showing which shaped buckle your students thought would be the best.  The large shape cards that feature traceable shape-words, can be uses as pocket or flashcards to review and assess.   Make an extra set; laminate, trim and cut into puzzles.

Students can also make an Itty Bitty booklet, as a cover is included.  Children trace and color the shape buckles, as well as trace and write the shape words.

I've also included smaller buckle shape cards along with shape word cards to play Memory Match or "I Have; Who Has?" games.  Children can match shape to shape or shape to word.

Click on the link to view/download the Shapely Buckles packet.  I've shared quite a few Thanksgiving/Pilgrim links in other blog articles and found another one today that you might also enjoy. This link contains 6 short video clips that include interesting Thanksgiving/Pilgrim information from the History Channel.

Since the Penguin Shape packet I & II as well as the Shapely Owls continue to be three of the most downloaded items on my site, I thought it would be fun to make one featuring turkeys.

Teachers can make the large shape-head turkeys for display or review, and then have students choose their favorite shape and make a shape body - turkey bird of their own.

A turkey version of the 4-Corners game can also be played with the large turkey heads.  Directions are included in the packet.

There are some turkey shape word cards you can use for pocket or flashcards.

Make extra sets to play Memory Match or "I Have; Who Has?" games, or cut them apart and make puzzles.  Click on the link to view/download the The Shape Of My Turkeys packet.

Finally, Susan over in Texas, asked if I could make the Pilgrim Shape Spinner game featuring turkeys.  No problem.  If you'd like a set too, click on the link to grab it.  Turkey Spinner Shape game.

Thanks for visiting today. I hope you can stop by tomorrow for a few more FREEBIES hot off the press.

"What could we accomplish if we knew we could not fail?" - Eleabor Roosevelt

Numbers, Shapes and Letters Oh My! 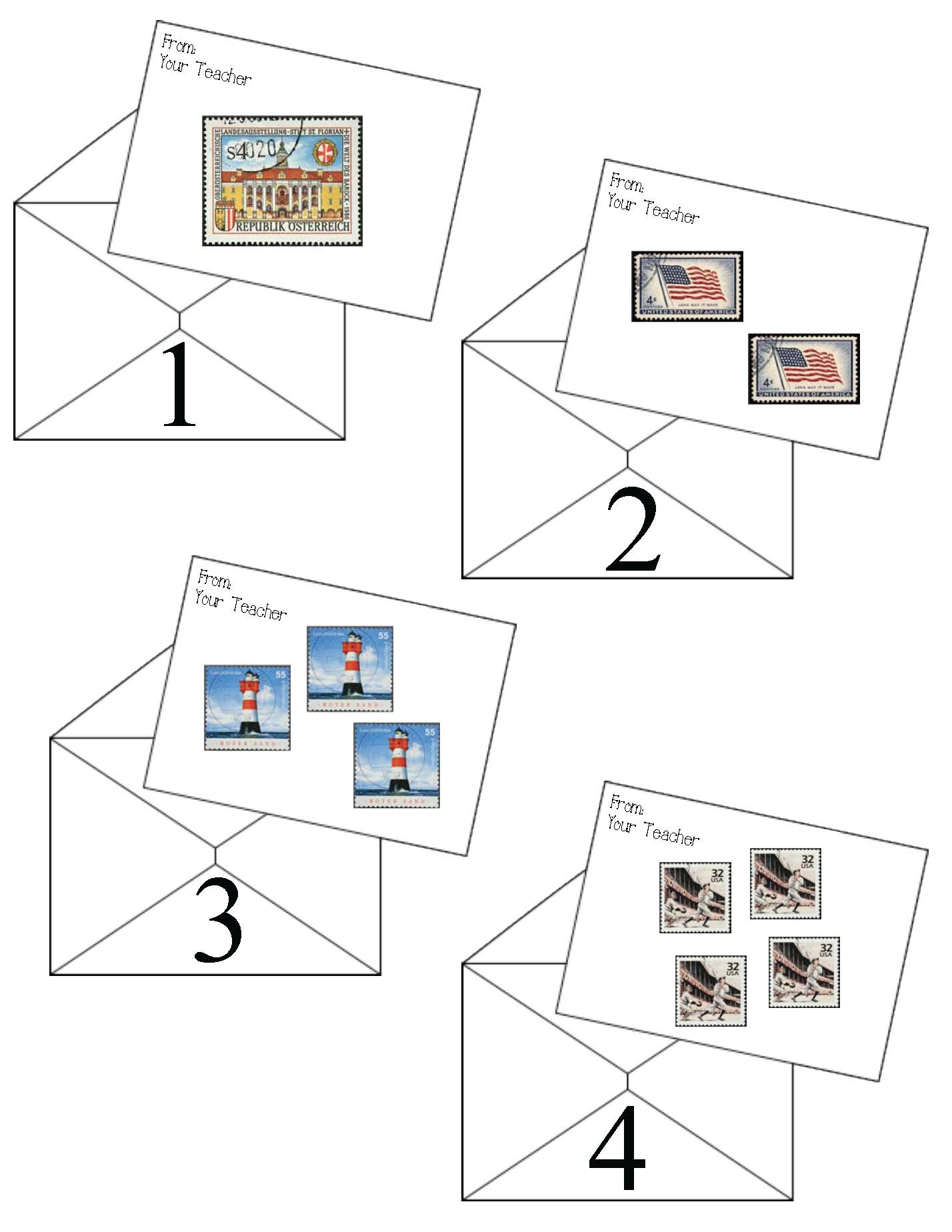 Woo Hoo! This is my 500th blog article! Hope you enjoy it.

I love making up special alphabet, number and shape cards for each month.

I think it helps students stay interested and focussed if they come in the first of every month and see a seasonal change that brightens up your room and adds variety to the "same-old- same-old"...

My Y5's loved going to the post office to mail their Valentines.  It was a fun way for me to cover that information, and just a few blocks walk from our school.

With that in mind, I wanted to dream up some cards involving envelopes.  I thought letters of the alphabet and letters in an envelope was a cute idea, thus Letter Letters, Number Letters and Shape Letters were born.

It includes a blank set for you to program with whatever...+ math symbols: < > + - = so students can make equations and solve them.

I've also included 2-pages of tips of what to do with the cards, including games.

Letter Letters  can be used as a border or laminate, cut them up into puzzles and use them to play games.

This packet includes a blank sheet for you to program with whatever...+ a cover so students can make an Itty Bitty Booklet, as well as 3-pages of tips of what to do with the cards. 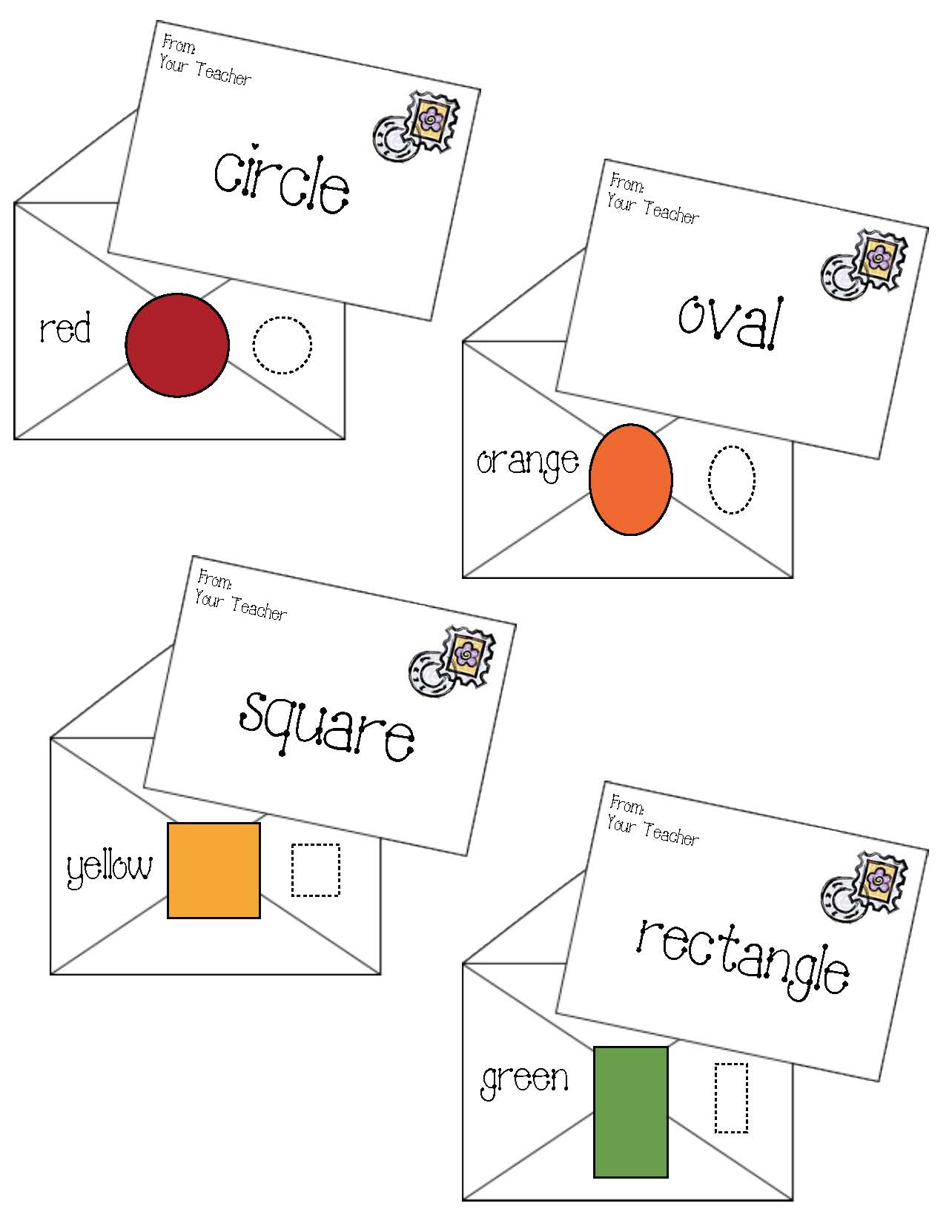 The packet helps reinforce colors and color words as well. Remind students that these are two-dimensional shapes and lie in a plane or "flat."

Put them on the wall as a border, or run off a set for your students and have them write the shape word and then trace and color the shape.

You can also laminate them, cut them up and make them into puzzles. Students match the word to its shape.

Pass them out to students and give spatial directions: "Put your shape over, under, between, behind, beside, left-right, etc."

Thanks for visiting today.  Feel free to PIN anything you think others will find helpful.