1-2-3 Play An Alphabet Matching Game With Me!

The Dollar Store is one of my favorite stores.  My mantra when I go in one is: "What can I do with this, that will help my students learn?"  so when I saw that they carried clip-on clothespins, I designed all sorts of games that students could "clip and match."  I did this for colors, numbers, upper and lowercase letters, shapes, and even glued my kiddos' photo on the front and back, so they could clip it to a yes or no answer for Question of the Day.

I used another photo clip for attendance. This clothespin could also be used on your behavior board. i.e. Children all start out on the green apple for "good" behavior, and move to a yellow apple when they've been warned, and finally to a red apple if there's a consequence.

Because my little ones needed help recognizing and writing their names, I wrote them on clothespins for them to "find".  These were kept in a bucket and were sometimes used when I graphed something.   Children could also pick a clothespin out of the bucket and have that child be their partner.

My clothespin craftiness started 13 years ago.  Creative minds must think alike, because I've seen clothespin activities all over Pinterest, with similar ideas.  One gal used yellow alphabet clothespins as "rays" that were clipped around a sun.  This gave me the idea to make several themed alphabet clothespin games. 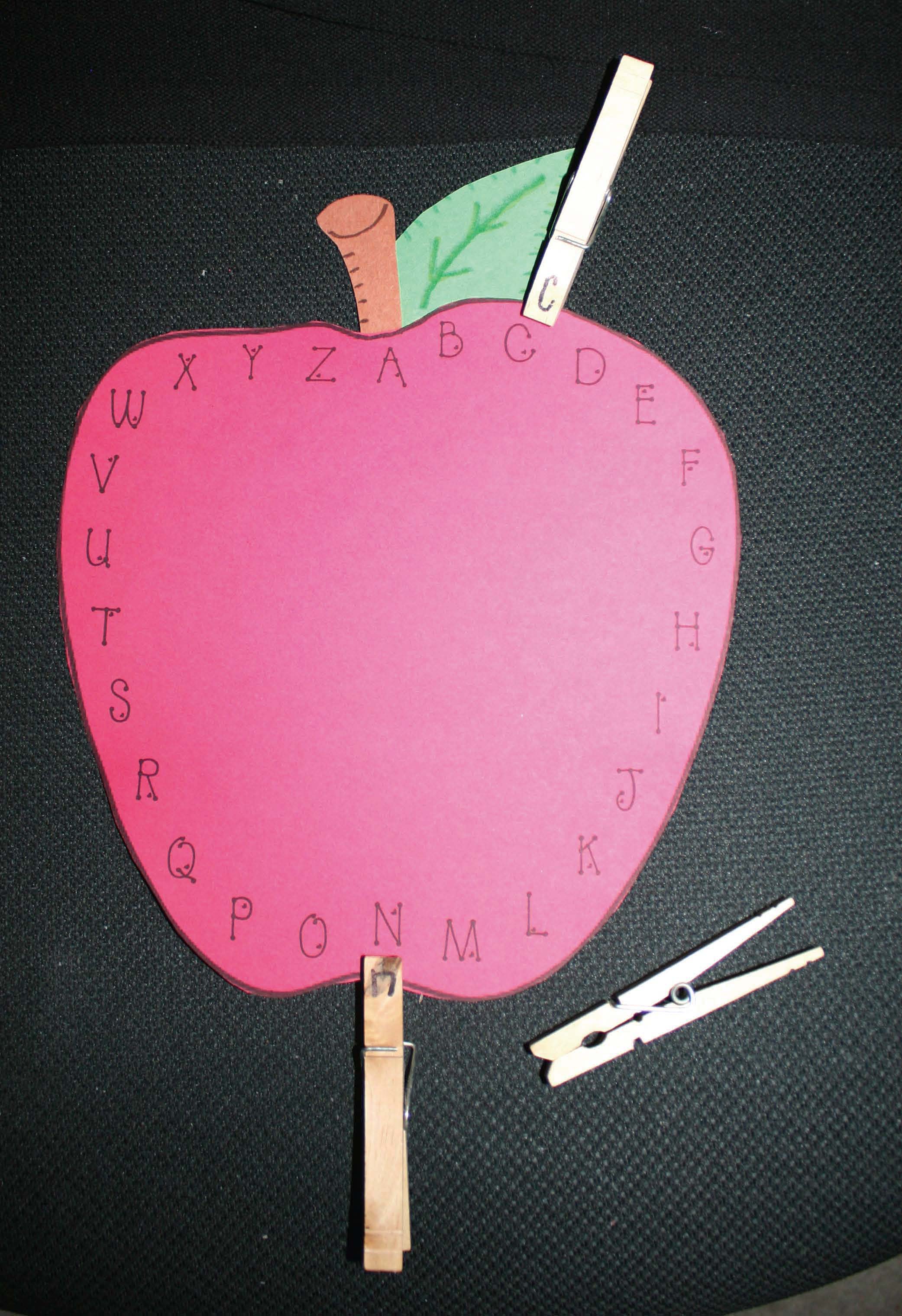 I started with an apple and then made a pumpkin. I'll fool around with a turkey and its feathers for November. Hopefully by then, all of your students will be able to identify upper and lowercase letters.

Here are some tips to help you make the apple/pumpkin alphabet games.  Directions for the pumpkin are similar and included in the packet. 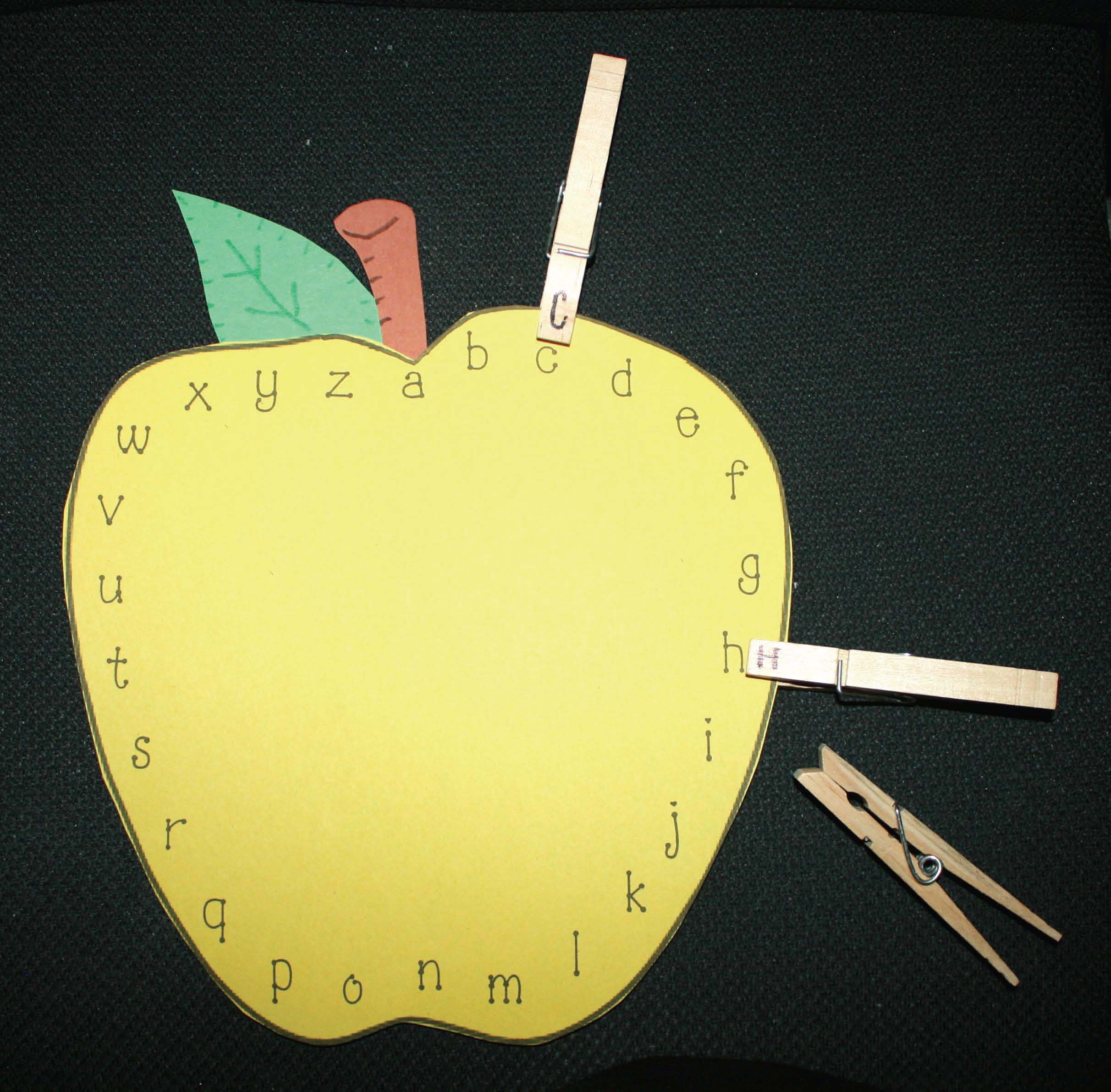 If you are making multiple games, so that more students can play, make a template for the leaves and stem. Print, cut and trace onto an old file folder to make a pattern that’s easier to trace.  Using the template, trace the leaf once on green construction paper and then cut several at a time. Do the same for the stem, only on brown construction paper.  Glue to the back of your apples then laminate.  Children will clip the Aa clothespins on the stem, and the Z or B clothespin on the leaf, depending on where you glue the leaves.  Run off the apples on red, yellow and lime green construction paper.

Another help for younger children, and allows for quick sorting, is to print the uppercase letters in red permanent marker, and the lowercase letters on the flip side, in black.   Bag up this particular set of clothespins and mark them Apple Clothespins.

Children can also play with a partner, dividing the clothespins so that each child gets 13 to clip. Teacher chooses the partners, so that a stronger student can help a child who’s struggling.  There's an apple and pumpkin alphabet anchor chart, so that children can self-check their work when they have completed clipping their clothespins.

Make a few extra games to send home with children who need more one-on-one help.  Inform parents via a note (There's one included in the pack) that they may BORROW the game for one week and need to return it on a specific day.  Jot yourself a note as to who has the game. I've also included a reminder note to send home, in case a child fails to return the game on time.

Thanks for visiting today. Feel free to PIN anything from my site.  To ensure that "pinners" return to THIS blog article, click on the green title at the top; it will turn black, now click on the "Pin it" button on the menu bar.  If you'd like to see all of the wonderful-educational ideas that I pin, click on the heart to the right of the blog.

"I was asked to memorize what I did not understand; and, my memory being so good, refused to be insulted in that manner." -Aleister Crowley

More in this category: « More Quick and Easy Apple Activities Part II Number Puzzles For Fall »
Login to post comments
back to top