As a child, I enjoyed playing the game Battleship. This pencil-paper game, has been played in various forms since the 1930’s. In 1967, Milton Bradley made the first plastic pegboard version, which is my personal favorite.

When Online games became popular, visitors were able to play against the computer, with no need for an opponent. If you're looking for a kid-friendly game site that makes a nice independent computer center, Primary Games does a nice job and has a Battleship option.

Since all sorts of math skills are practiced while playing the Battleship game, I decided to adapt the concept for the classroom, and designed Turkey Battle.

However, younger children can also play the game, by simply capturing turkeys. They'll be practicing the life skills needed to play games, as well as simple counting, number recognition from 1-5, plus uppercase letter recognition from A-E.

So there's no peeking, use file folders as a privacy screen. (I've included a cover for these, if you want to decorate them.)  Hidden behind the screen, Pilgrims position the turkeys on their “battle board”. There are two different sizes to choose from.

Older students record their hits via tally marks then add up the point values of each hit via skip counting by 2s, 5s and 10s. A point poster is provided, that you can hang up to assist in this.

If you want to give the game an extra twist and make it a bit more exciting, students can use the "Kaboom!" bomb cards. This gives kiddos another way to win.  Here’s how: Students get 3 bomb tiles to scatter on their battle board.   If their Pilgrim opponent sets off all three land mines, then they have lost the game.

Children decide how to win the game. Set a timer for 5-10 minutes; the Pilgrim who captures the most number of turkeys is the winner or the Pilgrim with the highest point value when the timer rings, is the winner.

To play, students alternate turns and get only one guess to capture a turkey. The first Pilgrim calls out an ordered pair (i.e. A5) and his Pilgrim opponent informs them if they have captured a turkey, and if so, its point value.

Pilgrims mark an X on their recording sheet of where they have guessed and make a tally mark on their paper in the appropriate point value place when a turkey is captured.

The game is done, when the timer rings.  I’ve included certificates of praise that you can pass out. (There are ones in color as well as black line.)  I find these mini certificates are a simple, yet effective way, to build self-esteem and good sportsmanship.

Click on the link to view/download the Turkey Battle November Math Game.   Thanks for visiting today.  My daughter Kelli, had baby Kaitlyn Monday night, so I'm off to do some super-fun "tickled pink" shopping.  Wishing you a blessed day.

"We may all have come on different ships, but we're in the same boat now." -Martin Luther King Jr. 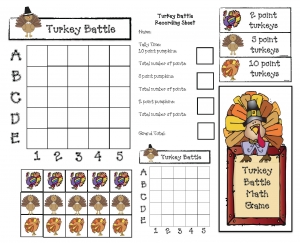