I love springtime. There's something magical and invigorating about it; and there are so many themes you can incorporate into your lessons.

The chick and bunny seem to be popular symbols, so with that in mind I used them to design some quick, easy and super-fun craftivities, which practice a variety of standards.

I'll be featuring 4 of my favorites, along with today's FREEBIE.  First up is a chick-themed -ick word family packet.

* A set of -ick word family picture cards, with matching -ick word cards, so you can play “Memory Match” and “I Have; Who Has?” games, individually, with a partner or as a whole group activity.

* To mix math with literacy, there's an “Isn’t it slick that I can skip count with my chick?” slider craft, with 2 size options.
These number sliders skip count by 2s, 3s, 5s, or 10s.

You can also practice the -op word family with my bunny packet.

The format is similar. The -op word family poster has an alphabetical list of 49 words, with some new words even to me, llke kop and trop, so I've also included a cover to make an —op word family dictionary.

I chose 18, or those -op words and made "just the right size", mini-cards.  Students can put them in alphabetical order, as an independent center, or partner up to see who can do it the fastest.

Another idea, is to have children choose 2-3 cards and use the words in a sentence.

The bunny and chick were also perfect to design some more "shapely critter crafts" which all started years ago with the penguin packet.

It's a wonderful, hands-on way to review 2D and 3D shapes.

Make a large set to use as flashcards, for whole-group games, and anchor charts, then have children pick their favorite and create their own.

I've included several posters for the center of your display.

The packets include an emergent reader, games, worksheets, and a "certificate of praise" bookmark.

For the emergent reader, students read, trace and write the shape word, fill in the shapes to look like chicks/bunnies; trace the shape and then draw that shape.

They also underline the capital letter and add end punctuation.

Both animals are super-cute, but my personal favorite is the bunny.

There are 3 pattern options for the rabbit: A whimsical looking one, a "fluffy" faced one, as well as blank templates so children can draw their own.

I've also included a paw pattern to make the shapes look even more like a bunny.

I think part of the bunny's charm, is that I also added a set of butterflies and ladybugs, which feature the various shapes.

For a bit of 3D pizzazz, students choose one and glue the bug to the top of one of the bunny's ears.

To get the 3D "pop" bend the ladybug's antennae forward.

For the butterfly, give children 2 different colors.

They trim and fold one of the butterfly's wings, then glue just the thorax to the top of the other butterfly. Easy-peasy and looks fabulous!

Besides the standard 2D shapes, due to many requests, I've also included the trapezoid and rhombus "pattern block" shapes, along with the hexagon, pentagon and octagon.

Since many teachers are also teaching 3D shapes, there's also patterns for the cone, cube, cylinder and sphere.

Click on the links for the "Slick Chick Spring Shape Up" packet, and the "Hop To It" Bunny Shape packet.

Finally, while diddling around with pattern blocks, I discovered that you can use other pieces, to make a hexagon.

Since this is a really new shape for my Y5s, it tends to be a "toughie" for them to remember.

I think part of the difficulty, is because there are not many "real life" examples for them to see.  With that in mind, I designed the "Don't be vexed by the "hex", hexagon challenge.

I putzed 'til I created a dozen arrangements, and have included a full-color, as well as a black & white template (filled in with lines, plus blank) for them to place pattern pieces on.

Later, after they've created some patterns, turn it into a "Speed" game; set a timer and see who can make the most hexagons before it rings.

Your students will enjoy hopping to the next number, as they skip count with the bunny, by 2's, 3's, 5's, and 10's.  I've also included "What's Missing?" worksheets for each skip counted set.  These are great for "early finishers" or homework to send over spring break.

Well that's it for today.  Thanks for visiting.  Time to switch gears and put my nana hat on, as I'm taking care of my grandchildren today.

Wishing you a love-filled day filled with lots of hugs and giggles.

"I love music of all kinds, but there's no greater music than the sound of my children and grandchildren laughing." -Sylvia Earle

My Y5's really enjoyed making "sliders."  I named them that, because you slide a strip of paper through slits that then revealed something in the cut out "window."

A slider was an especially successful way for my students to actually see, how a word family operated.

They liked seeing new words appear, as they slid their letter strip up and down.

To make a slider, simply run off the templates on construction paper.  Students cut out and assemble.

Add pizzazz to their chick with wiggle eyes, a 3D beak, a yellow feather atop the head, and by folding the wings forward.

I added that finishing touch to the bunny, with wiggle eyes and a pink pom pom nose. Students can also glue a cotton ball to the back for a fluffy bunny tail. 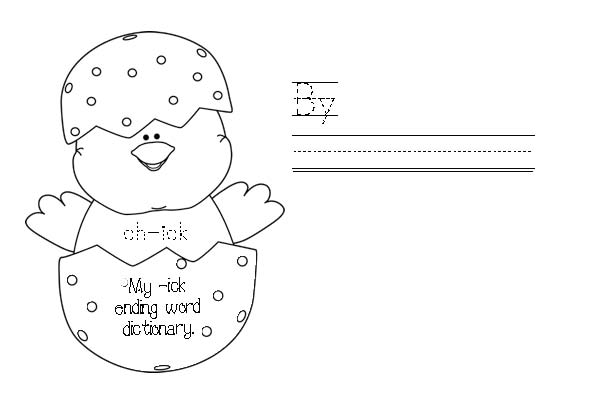 Sliders are a wonderful way for discovering words that your students are not familiar with.

Add these to the vocabulary-building activities included in the packet like this sweet -ick ending word dictionary.

I often built vocabulary for a variety of themes and word families via a dictionary.

I hope your students LOVE learning new words as much as I do!  One of my favorite things about the internet is the unbelievable amount of information available at the click of some keys.

While I was researching ick and op ending words I learned a few new ones I didn't know: snick, strop and swop! 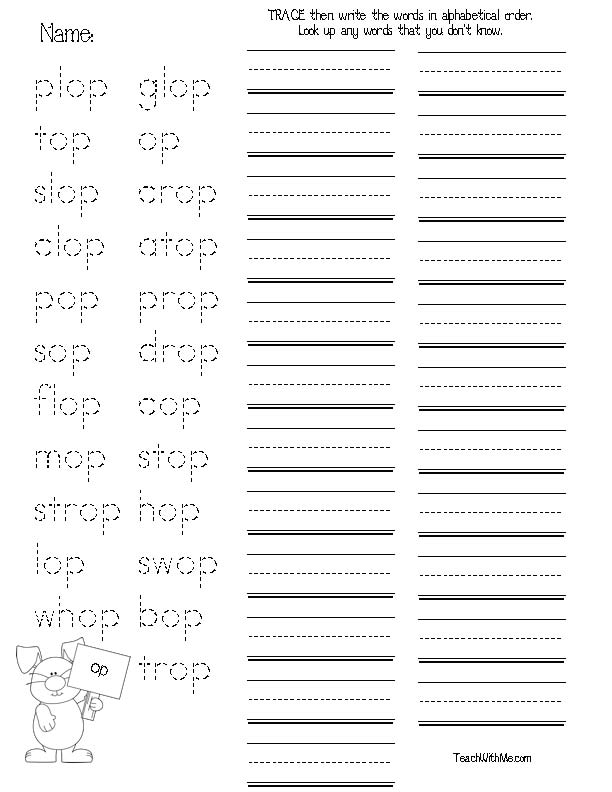 There's also a worksheet in each slider packet, where students trace and then write the word family words in alphabetical order.

Because I thought it would be slick for students to skip count with their chick, I also included skip counting strips for 2's. 3's, 5's and 10's. 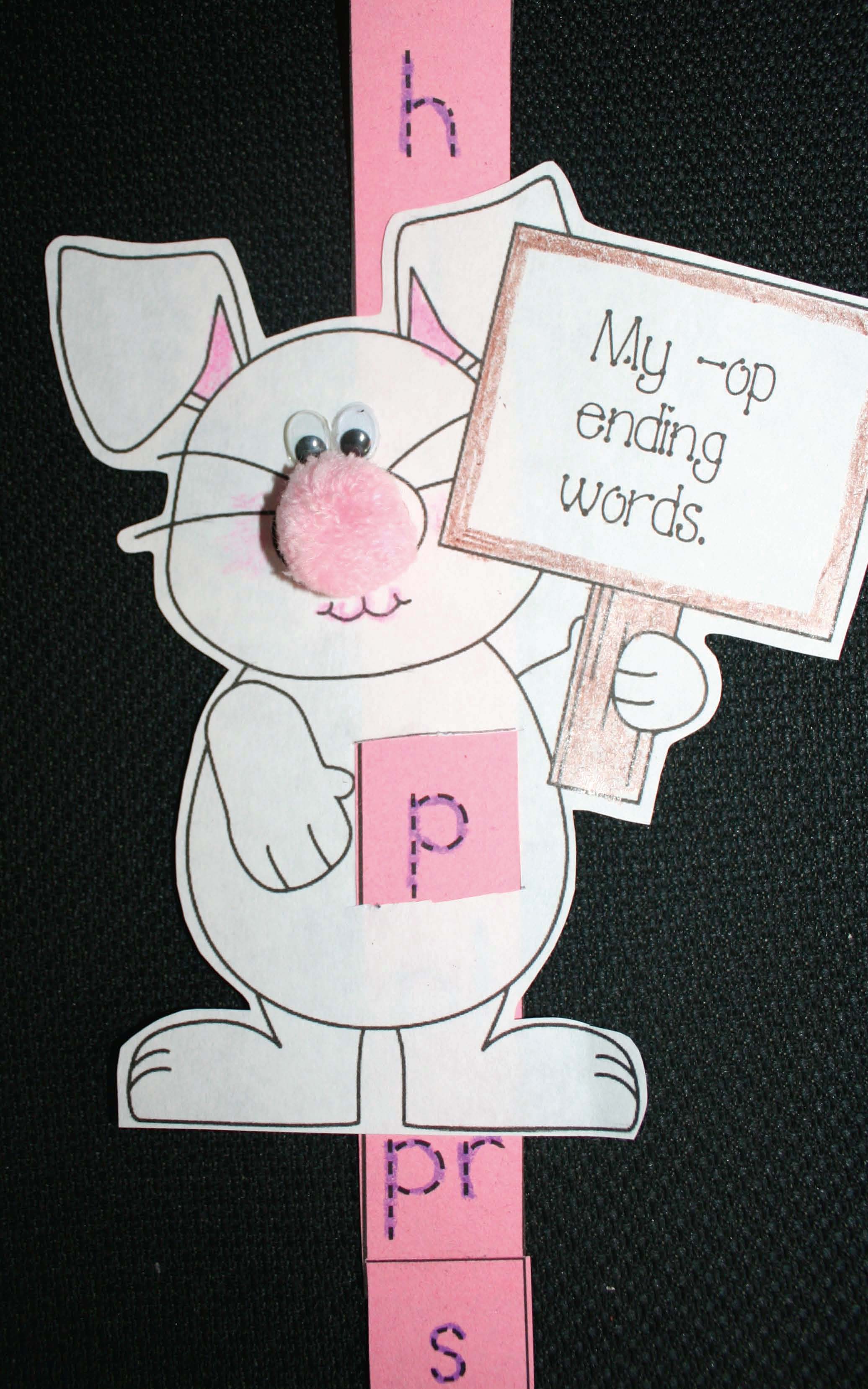 Click on the link to view/download the chick ick word family and skip counting sliders.

Click on the link to view/download the -op word family bunny slider packet.

If you like these spring sliders, you'll probably want to take a look at the sheep slider, featuring -eep Da -eap word family words.  Click on the link to view/download it.

Thanks for visiting.  The birds are chirping; the sun is shining and it's time for a much needed break to grab some fresh air.

"Do your work with your whole heart and you will succeed; there's so little competition." -Elbert Hubbard